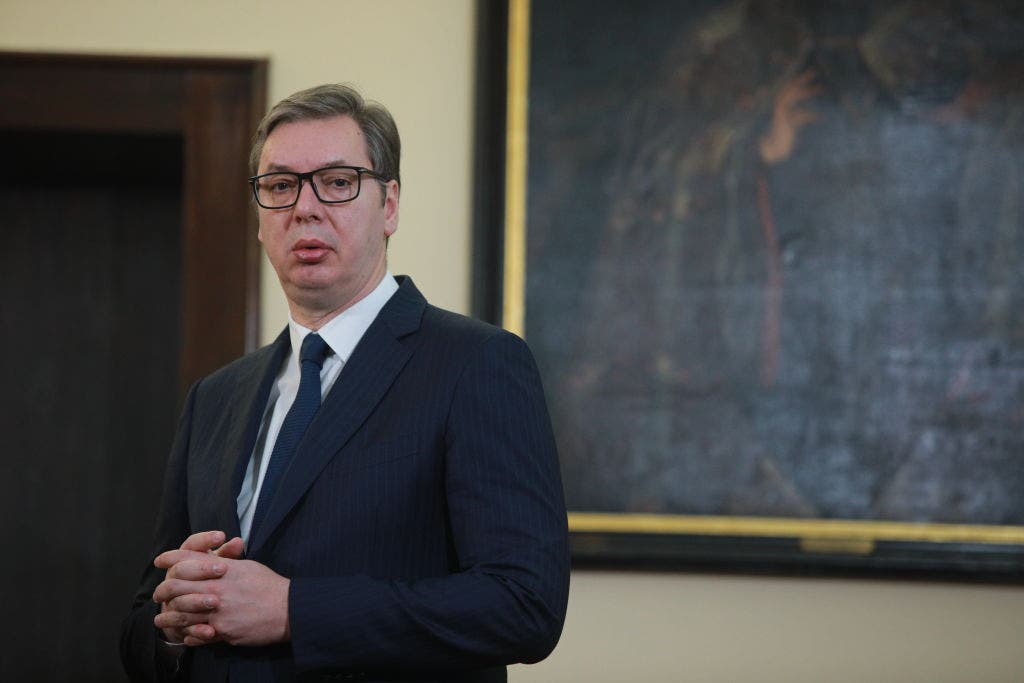 Hacking collective Anonymous has accused Serbian President Aleksandar Vucic of acting as “Putin’s puppet” as Serbia stirs up conflict with Kosovo in an act that Russia hopes may distract the West from Ukraine.

“Russia is trying to open a new front in Europe to distract the West,” Ivana Stradner, an adviser to the Foundation for Defense of Democracies’ Barish Center for Media Integrity, told Fox News Digital.

“Russia does not want to send troops or tanks or jets in the Balkans where Kosovo and Serbia are located,” Stradner said. “What Russia wants to do [is] create chaos inside the region, so the United States and our allies, so we do not pay attention that much to Ukraine and Russia, you know, to be distracted with what’s going on in Kosovo.”

Kosovo last week closed its border with Serbia as the two nations face increasing tensions. Ethnic Serbs had set up barricades at the border to protest the arrest of an ex-policeman suspected of being involved in attacks against ethnic Albanian police officers, France 24 reported.

“Such an illegal blockade has prevented the free movement and circulation of people and goods, therefore we invite our citizens and compatriots to use other border points for circulation,” Kosovo police said in a statement.

Several shooting incidents followed, with attacks on Kosovar police and international peacekeepers. Serbian armed forces went on heightened alert, but Vucic appeared to ease tensions after reaching an agreement on Dec. 29 that would see the blockade removed, the BBC reported.

Alexander Botsan-Kharchenko, Russian ambassador to Serbia, said Serbia may rely on Russia regarding the Kosovo situation, “regardless of the serious challenges … in the context of the confrontation with NATO,” according to Russian news agency TASS.

“We continue to take part in settling current international crises, including in Kosovo,” Botsan-Kharchenko said. “We will continue close coordination with Belgrade in defending Serbia’s legal rights concerning Kosovo and Metohija.”

Kosovo declared its independence from Serbia in 2008, but Serbia has never recognized it and has actively encouraged the country’s ethnic Serbian population to defy Kosovar authority.

This potentially chaotic situation presented a prime opportunity for Russian President Vladimir Putin, who treats Serbia as a “very close ally,” according to Stradner.

“[Serbia] does not border Russia, but in every possible sense they are supporting Russia when it comes to the war in Ukraine,” she said, adding that the Russian ambassador “received extra instructions from Moscow on how to proceed” on the issue.

Despite the removal of the blockade, Anonymous called out Vucic and accused him of prompting the blockade at Putin’s request, eventually declaring war on Vucic.

In the first week of the invasion of Ukraine, Russia attacked Ukraine’s government websites. The use of cyberattacks prompted Anonymous to declare war on Russia and start targeting Russian websites and commence a series of “hack and dump” attacks.

The large impact of the attacks has seen a large volume of information dumped out in public, including the release of 120,000 Russian soldiers’ personal details, access to the Kremlin’s CCTV system, and also gas pipelines out of Russia, according to the AnonymousTV Twitter account (it should be noted that Anonymous, by nature, has no single “official” account).

Soldiers of the NATO-led Kosovo Force patrol near a road barricade set up in the city of Mitrovica, Kosovo, on Dec. 29, 2022.
(Predrag Milosavljevic/Xinhua via Getty Images)

Recent attacks have hit more selective targets such as SIBUR, Russia’s largest petrochemical company, and a claim that Vucic is “Mr. Putin’s puppet.”

“It has come to our attention that the tensions and military provocations in the north of Kosovo by Serbian criminal elements are trying to cause armed conflict,” the group said in a video posted to Twitter. “Serbian autocrat President Aleksandar Vucic, a puppet of Vladimir Putin, is trying to destabilize the region using war criminal Slobodan Milosevic’s mechanisms of violence and terror, but it is known that this effort will be suicidal for him.”

The threat made little dent on Vucic, who responded by posting a picture of himself playing with his dogs on Instagram with the message: “We are getting ready for the fight against Anonymous.”

The group fired back, saying, “#Anonymous is not a small group of powerless people to ignore, we are an organized, globally active, collective of like-minded individuals and our message will be clear, if you don’t stop your dangerous actions in #Kosovo,” a post on AnonymousTV’s Twitter read.

Dustin Carmack, a research fellow for cybersecurity, intelligence and emerging technologies at the Heritage Foundation, cautioned that while such revelations may have good intentions, it’s hard to predict the knock-on effects.

“You saw that throughout different intelligence revelations over the last decade and the impacts that can have in Europe and other places,” Carmack told Fox News Digital.

“I think it’s very difficult in the environment that we are in for anybody to judge – especially a hacktivist group that may have a slim picture of something they think is revealing on one end, even if it is … to know it may affect second-hand or third-hand,” Carmack continued. “I think [in] this context, you don’t know the nature of Anonymous and who is making that decision.”

“You don’t know what the final tie-in for that person is who makes that decision, and that makes it very difficult for the Brits or Americans or anybody,” he added.

Peter Aitken is a Fox News Digital reporter with a focus on national and global news.